The Six Conditions of the Therapeutic Process according to the theory of Carl R. Rogers.

For therapy to occur it is necessary that these conditions exist.

2.    That the first person, whom we shall term the client, is in a state of incongruence, being vulnerable, or anxious.

3.    That the second person, whom we shall term the therapist, is congruent in the relationship.

4.    That the therapist is experiencing unconditional positive regard toward the client.

5.    That the therapist is experiencing an empathic understanding of the client’s internal frame of reference.

6.    That the client perceives, at least to a minimal degree, conditions 4 and 5, the unconditional positive regard of the therapist for him, and the empathic understanding of the therapist. (p. 213)

Quoted from:
Rogers, C.R. (1959). A theory of therapy, personality, and interpersonal relationships as developed in the client-centered framework. In S. Koch (Eds.), Psychology: Study of a science: Vol. 3 (pp. 184–256). New York: McGraw Hill.

An experience that contributing to changing Rogers’ approach to therapy:

“An intelligent mother brought her very seriously misbehaving boy into the clinic…” Rogers took a history and another psychologist tested the boy. “We decided in conference that the central problem was the mother’s rejection of her son. I would work with her on this problem.”  The other psychologist would do play therapy with the boy. “In interview after interview” Rogers tried “to help the mother see the pattern of her rejection and its results in the boy. All to no avail. After about a dozen interviews I told her I thought we both had tried but were getting nowhere, and we should probably call it quits. She agreed. Then as she was leaving the room, she turned and asked, ‘Do you take adults for counseling here?’ Puzzled, I replied that sometimes we did. Whereupon she returned to the chair … and began to pour out a story of the deep difficulties between herself and her husband and her great desire for some kind of help. I was bowled over. What she was telling me bore no resemblance to the neat history I had drawn from her. I scarcely knew what to do, but mostly I listened. Eventually, after many more interviews, not only did her marital relationship improve, but her son’s problem behavior dropped away as she became a more real and free person….

“This was a vital learning for me. I had followed her lead rather than mine. I had just listened instead of trying to nudge her toward a diagnostic understanding I had already reached. [from Rogers, C. R. (1980). A Way of Being, pp. 36-37. Boston: Houghton Mifflin.] 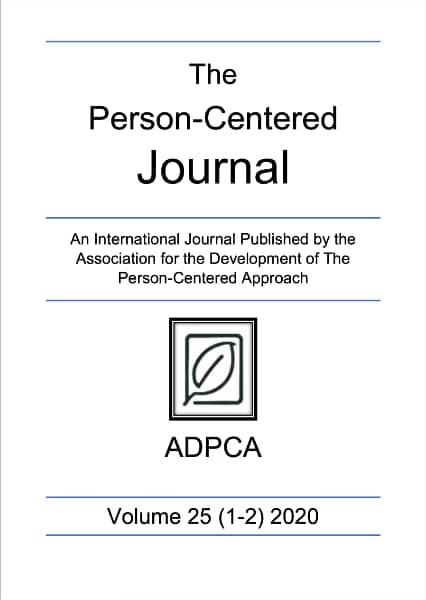 Please submit articles of no more than 5,000 words to editorspcj@gmail.com with the heading “PCJ 2021 Submission”. Further details are available here.